In terms of automation breakthroughs, metal finishing technology was ahead of heavy-metal-removal machine tool technology by several decades throughout much of the 20th century. This is the story of one of the earliest pioneers in metal finishing automation. The company has lived on and brought a steady sequence of innovations to the aerospace and other industries, as led by the founder’s four subsequent family generations. A singular focus on finishing technology is the key ingredient to their success; in 2010 Acme celebrated their 100th anniversary.

In 1911, Acme Manufacturing built its first machine tool, a single spindle semi-automatic buffing machine in a small shop in Detroit, MI. It was for the upstart automotive industry – specifically for headlight reflectors made by the C.M. Hall Lamp Company.

Thirty machines in total were built for Hall Lamp, and not long after fifty more machines were sold to other lamp manufacturers. The company’s next innovation included machines built for polishing nickel-plated rings for an oil stove manufacturer.

By 1914, Acme founder, Gustave Carlson, and his company had developed a polishing machine that used loose emery, which was gravity fed onto a driven-canvas belt. The cost of brass had quadrupled, partly because it was needed for ammunition during World War I, so auto builders had switched to steel for headlamp reflectors. Acme perfected a patented two-step semi-automatic finishing process by combining first the loose emery polishing operation, followed by the cloth buffing operation. One operator was normally able to run more than one machine, making the semi-automatic finishing machines much more productive and economical than manual polishing and buffing methods.

Acme machines then began buffing hubcaps for Ford’s Model T in 1915. An indexing device allowed faster part loading and unloading, and the concept was right in line with Ford’s mass production philosophy. Ford’s annual car production had reached 500,000 cars by 1915.

Acme began the 1920s by developing the first centerless tube buffing machine with a roller-wheel-type tube-feed system, for steel tubing and brass tubes used in the plumbing industry.

Then the 1929 crash and investment in capital equipment virtually stopped.

By the mid 1930s, the auto industry market was back in growth-mode, and higher production volumes were needed for door handles, levers, bumpers, grills, and trim molding. Acme responded with rotary worktables that featured multiple floating-type, adjustable buffing and polishing heads positioned around the table to perform a series of finishing operations. High-quality finished surfaces were required prior to chrome plating, and Acme became the favored source for automation. 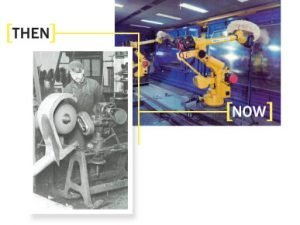 The 1940s brought the introduction of Acme’s straight-line, multiple-station systems, with a steady increase for the plumbing and lock industries.

Growth in the automotive industry in the 1950s led to the need for production capability for high volumes of large die-cast grills, head and tail lamp housings, trim moldings, and steel-plated bumpers. Acme responded by engineering and building larger straight-line polishing and buffing systems, sometimes requiring from 25 to 75 adjustable finishing stations.

Discrete part manufacturing was not the only arena where Acme contributed. “Steel coils were our next challenge. In 1957, we created a new market when we designed a 56″ wide coil grinding system for Republic Steel Corporation for condition grinding and polishing of stainless-steel coils,” says Glen A. Carlson Jr., Chairman. Glen is the founder’s grandson and represents the third of four generations of family ownership of the business.

Advances in controls technology allowed Acme to fully embrace and apply CNC in the 1980s, developing programmable positioning tables for polishing and buffing.
Acme became a prime integrator of FANUC multi-axis robots. Acme engineers designed and built the fixturing, end-of-arm tooling, incoming and outgoing part-handling automation, and all needed elements of the cell. They also integrated and programmed the robots.

The success of these flexible, programmable cells was a factor in Acme’s next strategic management decision. “We decided to phase down automotive industry applications and expand business opportunities in the aerospace, medical, and other growing global industries,” says G. A. (Fritz) Carlson, President (and the fourth generation of Carlson’s at the helm). “This has proven to be a great direction for us.”

A typical cell for compressor blades and vanes, for instance, is focused on deburring and determining the radius of the blade root area. Coated abrasive flap wheels and nylon abrasive brushes with abrasive impregnation combine to remove burrs and blend heavy edges. The wheels and brushes are mounted on dual-spindle, floating heads that allow automatic wear compensation to extend the life of the abrasive media.
In conjunction with jet engine manufacturers, Acme has also designed special polishing and deburring systems for aerospace structural components for commercial aircraft, including Boeing and their subcontractors. These included fuselage skins, wing skins, extruded aluminum spars, and stringers that are manufactured in overall lengths from 10ft to 100ft, in various cross-sectional shapes.

Various automated finishing systems were built by Acme between 1980 and 2000 with floating type oscillating finishing heads, performing multiple sanding, brushing, polishing, and buffing operations. In-line conveyors are integrated into these systems to automate the part-handling functions, often allowing unattended, uninterrupted processing time of two or three hours or more. Other operations include deburring, blending, and edge radius verification of machined aluminum components prior to applying a final cosmetic surface finish.

In recent years, Acme robotic systems have reached new levels of high-volume output. An Acme polishing cell built in 2007 incorporates double floating-belt heads to deburr and polish zinc die lock hardware for a manufacturer in Brazil. One operator produces approximately 500 to 1,000 parts per hour. Multiple part-queuing racks are automatically indexed to two robots in this dual-robot cell. Acme-engineered part handling automation and finishing media expertise has set new benchmarks for production levels from robotic cells.
Today, hundreds of Acme robotic finishing systems are in the field, typically producing 10 to 200 parts per hour, or more, while reducing abrasive media costs by as much as 75%. Media life can be doubled or tripled due to contact efficiency, constant work pressure, cycle time repeatability, and the automatic adjustment and monitoring of media. Design and building of fully enclosed cells, performing one to 12 operations, are on a turnkey basis. Acme does all the programming, while integration of technologies, such as vision systems, deliver new levels of quality control and efficiency.

“Our customers rely on our accumulated knowledge of finishing media,” Fritz Carlson continues. “We work every week with coated and structured abrasives, buffing wheels and compounds, non-woven abrasives, and wire and nylon brushes. Over the years, we have solved thousands of application problems.”

In 2009, Acme was selected from over a hundred of FANUC integrators to receive FANUC’s President’s Award of Excellence, which is their most prestigious award that recognizes an outstanding integrator partner with a long-term commitment to robotic automation – a contributor to growth in the robotic industry.

For 100 years, Acme has had a singular focus on production finishing of metal products, applied creatively and efficiently to building systems for a multitude of components in many industries.

“Innovation has been our continuity factor. But the main reason why we retain customers in aerospace and other industries is because we consistently deliver high value for the capital equipment dollar…customers get uncommonly high ROI on our systems,” Fritz Carlson concludes. Simply put, this is why Acme has prospered for over a century, and has very good prospects for a second.